Databases are the cornerstone of most modern business applications, be it for managing payroll, tracking customer orders, or storing and retrieving just about any piece of business-critical information. With the right supplementary business intelligence (BI) tools, companies can derive all manner of insights from their vast swathes of data, such as establishing sales trends to inform future decisions. But when it comes to making accurate forecasts from historical data, that’s a whole new ball game, requiring different skillsets and technologies.

This is something that MindsDB is setting out to solve, with a platform that helps anyone leverage machine learning (ML) to future-gaze with big data insights. In the company’s own words, it wants to “democratize machine learning by giving enterprise databases a brain.”

Founded in 2017, Berkeley, California-based MindsDB enables companies to make predictions directly from their database using standard SQL commands, and visualize them in their application or analytics platform of choice.

To further develop and commercialize its product, MindsDB this week announced that it has raised $3.75 million, bringing its total funding to $7.6 million. The company also unveiled partnerships with some of the most recognizable database brands, including Snowflake, SingleStore, and DataStax, which will bring MindsDB’s ML platform directly to those data stores.

Using the past to predict the future

There are myriad use cases for MindsDB, such as predicting customer behavior, reducing churn, improving employee retention, detecting anomalies in industrial processes, credit-risk scoring, and predicting inventory demand — it’s all about using existing data to figure out what that data might look like at a later date.

An analyst at a large retail chain, for example, might want to know how much inventory they’ll need to fulfill demand in the future based on a number of variables. By connecting their database (e.g., MySQL, MariaDB, Snowflake, or PostgreSQL) to MindsDB, and then connecting MindsDB to their BI tool of choice (e.g., Tableau or Looker), they can ask questions and see what’s around the corner.

“Your database can give you a good picture of the history of your inventory because databases are designed for that,” MindsDB CEO Jorge Torres told VentureBeat. “Using machine learning, MindsDB enables your database to become more intelligent to also give you forecasts about what that data will look like in the future. With MindsDB you can solve your inventory forecasting challenges with a few standard SQL commands.” 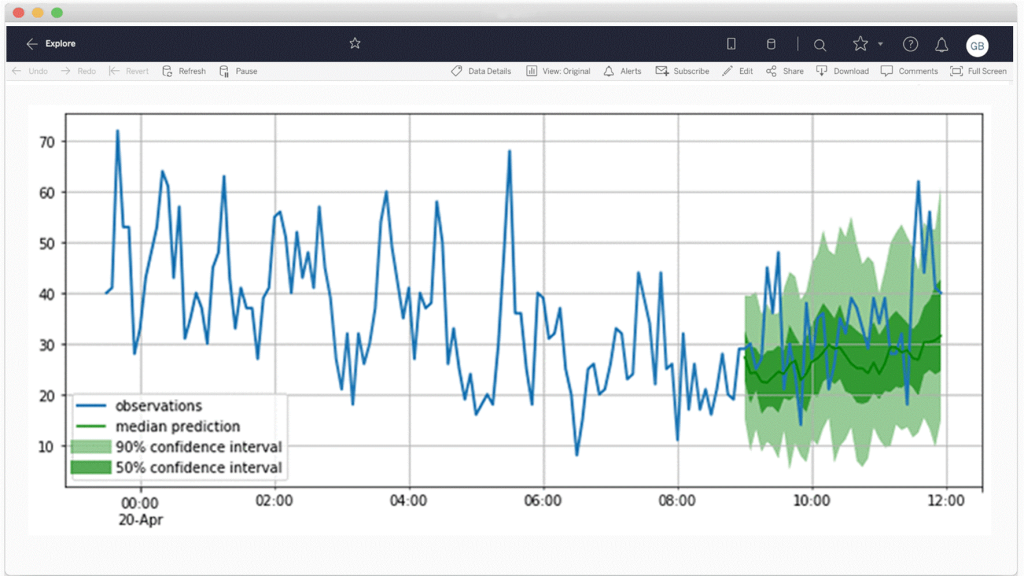 Above: Predictions visualization generated by the MindsDB platform

Torres said that MindsDB enables what is known as In-Database ML (I-DBML) to create, train, and use ML models in SQL, as if they were tables in a database.

“We believe that I-DBML is the best way to apply ML, and we believe that all databases should have this capability, which is why we have partnered with the best database makers in the world,” Torres explained. “It brings ML as close to the data as possible, integrates the ML models as virtual database tables, and can be queried with simple SQL statements.”

MindsDB ships in three broad variations — a free, open source incarnation that can be deployed anywhere; an enterprise version that includes additional support and services; and a hosted cloud product that recently launched in beta, which charges on a per-usage basis.

The open source community has been a major focus for MindsDB so far, claiming tens of thousands of installations from developers around the world — including developers working at companies such as PayPal, Verizon, Samsung, and American Express. While this organic approach will continue to form a big part of MindsDB’s growth strategy, Torres said his company is in the early stages of commercializing the product with companies across numerous industries, though he wasn’t at liberty to reveal any names.

“We are in the validation stage with several Fortune 100 customers, including financial services, retail, manufacturing, and gaming companies, that have highly sensitive data that is business critical — and [this] precludes disclosure,” Torres said.

The problem that MindsDB is looking to fix is one that impacts just about every business vertical, spanning businesses of all sizes — even the biggest companies won’t want to reinvent the wheel by developing every facet of their AI armory from scratch.

“If you have a robust, working enterprise database, you already have everything you need to apply machine learning from MindsDB,” Torres explained. “Enterprises have put vast resources into their databases, and some of them have even put decades of effort into perfecting their data stores. Then, over the past few years, as ML capabilities started to emerge, enterprises naturally wanted to leverage them for better predictions and decision-making.”

While companies might want to make better predictions from their data, the inherent challenges of extracting, transforming, and loading (ETL) all that data into other systems is fraught with complexities and doesn’t always produce great outcomes. With MindsDB, the data is left where it is in the original database.

“That way, you’re dramatically reducing the timeline of the project from years or months to hours, and likewise you’re significantly reducing points of failure and cost,” Torres said.

The Switzerland of machine learning

The competitive landscape is fairly extensive, depending on how you consider the scope of the problem. Several big players have emerged to arm developers and analysts with AI tooling, such as the heavily VC-backed DataRobot and H2O, but Torres sees these types of companies as potential partners rather than direct competitors. “We believe we have figured out the best way to bring intelligence directly to the database, and that is potentially something that they could leverage,” Torres said.

And then there are the cloud platform providers themselves such as Amazon, Google, and Microsoft which offer their customers machine learning as add-ons. In those instances, however, these services are really just ways to sell more of their core product, which is compute and storage. — Torres also sees potential for partnering with these cloud giants in the future. “We’re a neutral player — we’re the Switzerland of machine learning,” Torres added.